“The original 57 FAMU graduates set extraordinary examples for generations to follow, and anyone motivated by service, including today’s Rattlers for Justice,” said President Larry Robinson, Ph.D. “This plaque memorializes them and will inspire current students to similar acts of selfless courage. This is what happens, and can happen, when we are striking in unity.”

The original FAMU College of Law at the Coleman Library was closed in 1968. (Photos credit: Glenn Bell/FAMU Office of Communications)

“The 57 individuals who matriculated through the original FAMU College of Law will now have their names permanently marked outside the building where their careers began,” said Deidré Keller, dean of FAMU Law. “These 57 alumni were Rattlers for Justice decades ago. We are thankful for our original alums, their accomplishments, and the legacy of transformative service they established, which we endeavor to continue.”

Among the graduates of the original law school are former judges, a U.S. congressman, the late Alcee Hastings, a former Florida Secretary of State, a former state senator, and other public servants. 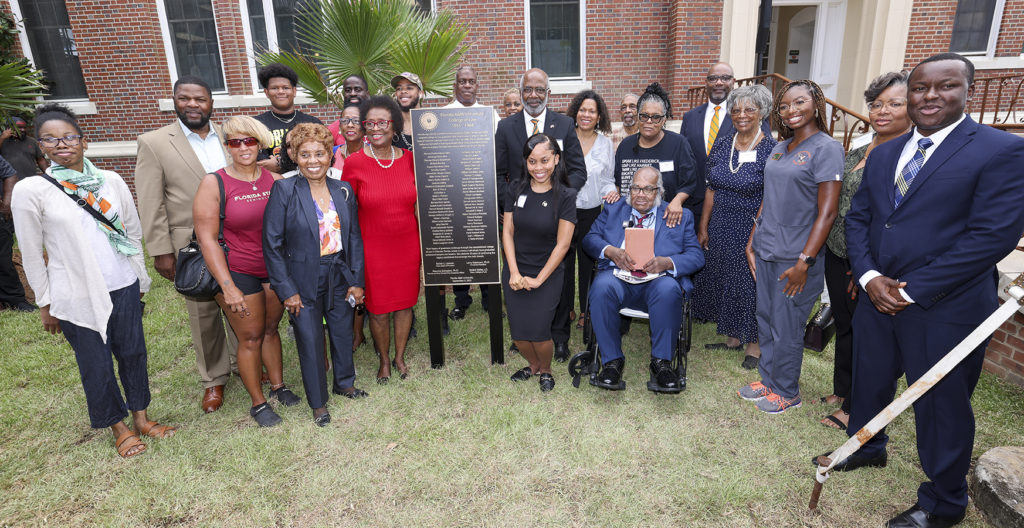 Former Senator Arthenia Joyner and civil rights attorney John Due along with relatives of some of the 57 graduates of the original FAMU College of Law on Friday, Sept 9, 2022 at the Coleman Library.

The FAMU College of Law boasts a unique history. It is the only one of the six HBCU law schools currently in existence that was opened, shutdown, and re-opened.

Originally established on December 21, 1949, the division of law at Florida A&M College admitted its first class in 1951. The legislature established the school because no “separate but equal” state-supported law school existed for African Americans at the time. The school’s enrollment was limited to Black male students at the time and was located in Tallahassee.

However, the FAMU law school was closed through a vote of the Florida legislature in 1965, with the funds transferred to a new law school at formerly all-white Florida State University. In 1966, the institution lost the right to admit students after a decision by the Florida Board of Control, and two years later, in 1968, the last students graduated. In all, 57 students graduated from the school between 1954 and 1968.

The 2000 Florida Legislature unanimously passed legislation establishing a law school at Florida A&M University, and on June 14, 2000, Governor Jeb Bush signed the bill into law. At a temporary location, the FAMU College of Law admitted its first class in the fall of 2002. Members of the first class of the reestablished law school had the degree of Juris Doctor conferred on April 30, 2005, in Tallahassee. In January 2006, the College of Law opened at its state-of-the-art permanent location in Orlando, Florida.

In his remarks, President Robinson was unstinting in highlighting the law school’s historical significance.

“The FAMU College of Law’s legacy is engraved in the annals of our state and our country through the accomplishments of the initial 57 graduates. History also records that the University of Florida only graduated two Black law students 12 years after the 1958 desegregation. Until the 1980’s, neither UF nor Florida State University, graduated 57 Black law students,” Robinson told Friday’s outdoor gathering.