President Robinson at the Florida Board of Governors.

President Larry Robinson, Ph.D., said Edington’s election as CAVP chair is “a testament to how much respect they have for him in the State University System of Florida. It’s a lot of work.”

“Maurice brings the expertise that is needed, particularly in these times, to get the voice of the academic vice presidents to the Board of Governors,” Robinson added. “I am really excited for him. I know it’s going to be a job well done.” 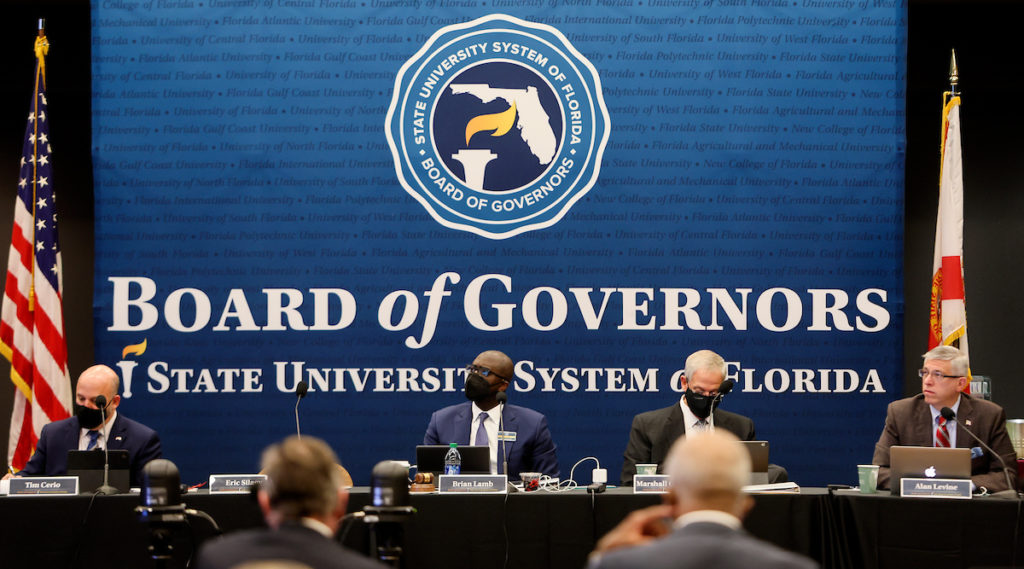 Florida Board of Governors meets at the University of North Florida in Jacksonville.

In his new capacity, Edington addressed the Florida Board of Governors (FBOG) for the first time at their meeting on the University of North Florida campus in Jacksonville Tuesday. During his brief update, he spoke about the CAVP’s priorities such as how SUS campuses respond to new laws passed during the 2022 Legislative session.

Senate Bill 7044, on accreditation and textbook affordability, mandates educational institutions seek and obtain other accreditation in the year following reaffirmation or fifth-year review. It prohibits Florida public state colleges and universities from being accredited by the same accrediting agency or association for consecutive accreditation cycles.

“Our committee has spent a great deal of time looking at how each institution would work to implement new legislation about accreditation and the timelines for moving forward to a new accreditor,” Edington told the BOG.

FAMU is accredited by the Southern Association of Colleges and Schools Commission on Colleges, the regional accrediting agency for Florida institutions. Its accreditation was reaffirmed for 10 years in 2018.

SB 7044 also permits the BOG to adopt a regulation requiring each state university tenured faculty member to undergo a comprehensive post-tenure review every five years. Additionally, the bill aims to address textbook affordability and transparency of instructional materials. The bill mandates that a list of required and recommended textbooks and instructional materials be posted on an educational institution’s website at least 45 days before the first day of class for each term.

The other major piece of legislation was HB 7, the “Individual Freedom” bill that would restrict topics deemed sensitive, including race, discrimination, sex, or national origin, from classroom instruction and workplace training. The bill requires teachers to undergo life skills training and assures that instruction and supporting materials do not contradict the bill’s “Individual Freedom” provisions. According to the bill analysis, “the bill requires that instruction, instructional materials, and professional development in public school must be consistent with the principle of individual freedom.”

“We’ve discussed the need for training on our campuses for faculty and staff to ensure that we’re all in compliance with the legislation,” Edington said regarding HB 7.  SUS campuses will address these new laws the same way as they have done in previous years, Edington said.

“We are used to dealing with new legislation every year,” he explained. “We will address it collectively to look at the best practices. We always work collaboratively.”

Edington, a professor of chemistry, was vice president for Strategic Planning, Analysis, and Institutional Effectiveness before assuming his current role as provost and VP for Academic Affairs in 2018.

“I’m honored that my colleagues had the confidence to elect me to lead the group. I look forward to working with them and the BOG in the coming year,” Edington said following his appearance in Jacksonville.