The additional five people would be just for athletics, Robinson said.

“We have committed to hiring compliance people to help with financial aid, academic progress, GPA issues and so forth,” he added.

In addition, Robinson pledged to ensure that the University’s 18 academic advisers are trained in the complexities and nuances of advising student-athletes in terms of academic progression, GPA, and other issues.

“Academic advisement is different for student-athletes than with typical students,” Robinson said. “I want our team to be working on behalf of each of these students.” 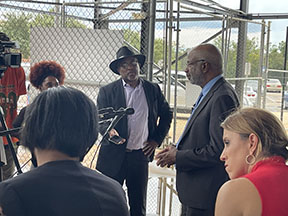 Robinson spoke to the media following an hour-long meeting with football players in the Galimore-Powell Field House locker room. He had asked for the meeting a day after the players released a six-page letter airing a list of grievances and concerns, including eligibility, financial aid, housing, and even complimentary tickets for family members – that policy was reversed allowing four tickets per player for family members. 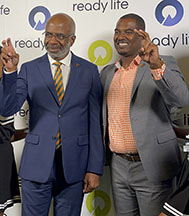 Disaffection among football players became public on Friday after they initially voted not to play in the season opener at the University of North Carolina-Chapel Hill when players learned that more than 25 of their teammates had been deemed ineligible to take the field.

Robinson said it was necessary to have a face-to-face meeting.

“I wanted to come and talk to them in person and hear what their concerns were,” Robinson said. “I appreciated the letter, but I got more of the sense of their passion and urgency around the issues when I talked to them in person. I wanted to look them in the eye and hear from them directly and not try to have to interpret from the letter.”

“We had the opportunity to hear from them and respond to them as well. It wasn’t just a listening session on my behalf,” he said. “We tried to let them know where the services are. It was a very understanding dialogue. One of the things I most appreciate is the professionalism with which the young men conducted themselves.”

During the press conference, Robinson responded to criticism that the administration neglects athletics.

To address the issues facing the Athletics Department, the University earlier this year approved the following new positions: assistant/associate athletic director for compliance; financial aid coordinator liaison in the Division of Student Affairs; assistant/associate athletic director of Compliance – eligibility;    a certification officer (liaison) in the Registrar’s Office, which is part of the Division of Student Affairs.