A statue of civil rights leader and educator Mary McLeod Bethune was unveiled Wednesday during a special congressional dedication ceremony at Statuary Hall in the U.S. Capitol. Bethune is the first African-American to be honored in the hall.

Chiseled from marble quarried from Michelangelo’s cave in Tuscany, the statue will represent the state of Florida. Abronze version of the statue will be installed in Daytona Beach, Florida.

“Today’s unveiling of the statue of Dr. Mary McLeod Bethune in Statuary is a testament to what one person can do and the power of education,” said Florida A&M University President Larry Robinson, Ph.D.  “Dr. Bethune’s legacy remains strong in our sister HBCU Bethune-Cookman University, and we are proud to share the promise of higher education here in the state of Florida. Congratulations to interim President Larry Drake, Ph.D., and the B-CU family on this major milestone. We celebrate this historical moment with you,” added Robinson. 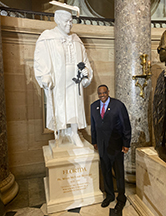 An adviser to four American presidents, Bethune believed education was crucial to Black racial advancement. She founded what is now Bethune Cookman University in Daytona Beach. Additionally, she was a civil rights pioneer, philanthropist, and a champion for African American women’s rights.