Michael Abazinge, Ph.D., is a FAMU alumnus and School of the Environment tenured professor.

Following a comprehensive internal search, Florida A&M University (FAMU) Provost and Vice President for Academic Affairs Maurice Edington, Ph.D., has appointed Michael Abazinge, Ph.D., as the next associate provost and dean for the School of Graduate Studies and Research.

Abazinge will begin his new position on Friday, April 1.

A tenured professor in the University’s School of the Environment, Abazinge joined FAMU as an assistant professor in 1988. He has served in several administrative capacities during his time at FAMU including, technical services manager, interim director and interim dean. 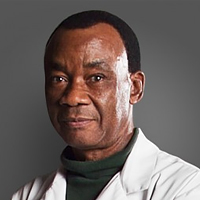 “I am quite pleased that we had a number of outstanding internal candidates. Dr. Abazinge’s distinguished record of success in the areas of scientific research, graduate education, grantsmanship, and administrative leadership made him ideally suited for this important role,” said Edington. “His broad set of professional experiences perfectly align with our ambitious vision and goals for graduate education, which includes increasing graduate enrollment in programs of strategic emphasis and elevating the University’s Carnegie Classification to R1-very high research activity.”

In addition to his responsibilities as a professor, Abazinge, a 1981 FAMU graduate, also serves as the associate director for the National Oceanic and Atmospheric Administration (NOAA) Center for Coastal and Marine Ecosystems (CCME) under the leadership of FAMU President Larry Robinson, Ph.D., who serves as principal investigator and director.

Abazinge has produced 17 Master of Science and seven doctorate graduates, and his research findings have appeared in more than 30 publications, with several others soon to be released. Abazinge currently holds the patent for Eco-Wares, Ecosystem-Based Water Retention/Reuse System, and two other projects pending patent approval.

Although highly regarded for his scientific research, Abazinge was instrumental in helping what was previously the environmental sciences program in the College of Agriculture and Food Sciences become what is now the School of the Environment.

He is also credited for creating and writing curricula for various graduate-level courses and programs and securing funding for the University’s research projects and initiatives.

“I see myself as someone who has been in the trenches in graduate education,” he said. “In this role, I want to collaborate with students, advisers and deans to increase the number of graduate degrees awarded each year…what excites me is being involved in training our students to power our new workforce and future leaders.”