This is the second HBCU Impact Summit in Florida. The first summit was held at FAMU in 2019. Edward Waters University will host the third summit in 2023.

The Summit is seen as an opportunity to tell the respective stories of these institutions. The plight of HBCUs has received national attention in the wake of George Floyd’s death in 2020 and the diversity and equity reckoning that followed.

During several panels Friday, the four presidents addressed a wide range of issues, including research, HBCUs ability to improve the economic status of graduates, and their digital transformation spurred by the COVID-19 pandemic. 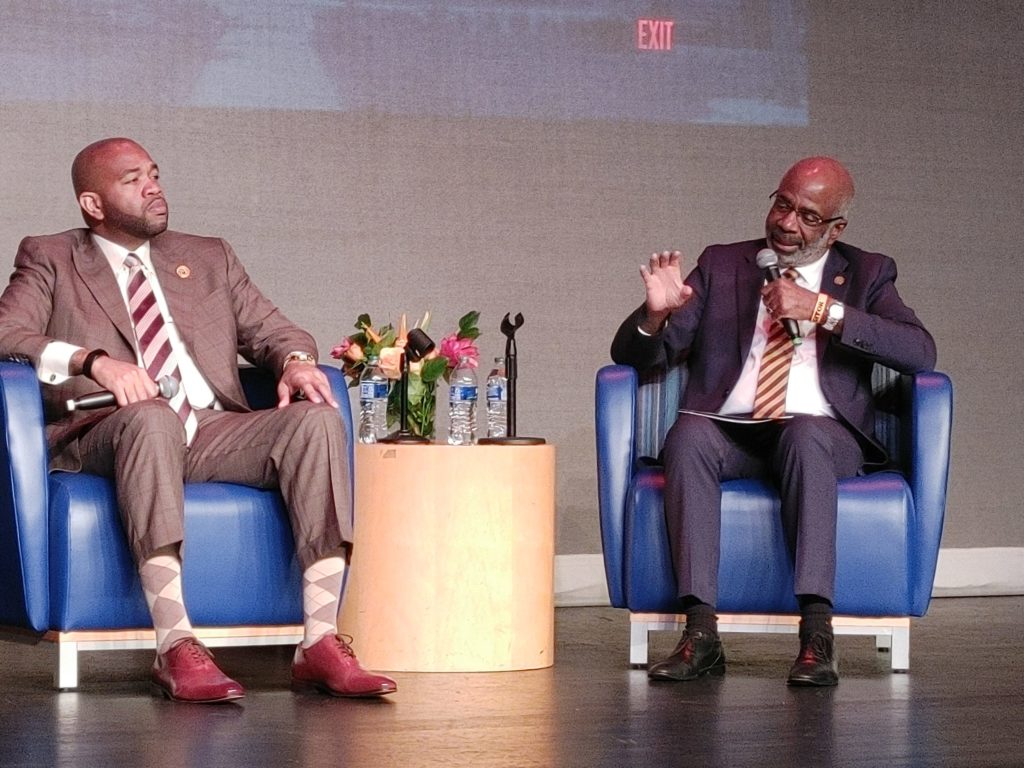 “We are so far ahead of where we thought we would be at this time because of COVID. We can’t go backward. We’re not at 100 percent virtual; we’ll never be 100 percent virtual.  There are other schools out there to do that. There is tremendous value in an on-campus experience for the vast majority of our students,” said Robinson, who was thankful for the $99 million in federal CARES Act funding the University has received. “Without those federal funds, I just don’t know how we would have made it. Those funds have made a tremendous difference.”

EWU President Faison said the pandemic forced the hand of the entire higher education community. “It caused us to do things earlier than we wanted to them,” said Faison, who cautioned the other panelists and the audience about the trend toward virtual education. He said although EWU was approved to provide all of its courses online in December 2019, many of his undergraduate students prefer in-person instruction.

“We’re finding that was not necessarily the wave of the future with regard to the demographic and type and profile of students we serve,” Faison said of online courses. “It has its place primarily with adult learners and other learners like working parents, but it’s not the panacea many folks thought it was going to be,” Faison said.

To illustrate the transformative impact of an HBCU education, Robinson shared his personal story of being a student who was interested in science and starting at LeMoyne-Owen College, a small HBCU in his hometown, Memphis, Tennessee. He recalled that after he transferred to Memphis State University, he had to audit some of the same classes he had already taken at LeMoyne-Owen to prove he could actually do the work.

“There is no such thing as mediocrity among our folks. We go out and we compete with the best of them and we excel,” said BCU’s Powell, who draws inspiration from the words of his school’s founder, Mary McLeod Bethune. He said HBCU graduates may not begin with all the same skills as students from predominantly white institutions, but they make up for that with their work ethic and attitude.

“We prepare them accordingly and send them out not only to compete but, in many cases, to take over,” Powell added.

The presidents agreed that HBCUs need to persevere with their legacy of excellence.

“It’s about us making sure that we double down on excellence and not being afraid of metrics,” said FMU President Hardrick, whose campus hosted the event. “There has to be a level of accountability, but we won’t shirk our responsibility to ensure that our students are graduating in a timely way, that they do have the kinds of postgraduate opportunities from an employment perspective or entering graduate or professional schools. We have to double down on those things because that’s what our history has been. That prodigious history has been producing those kinds of outcomes for a long time.”