Director of Bands Shelby Chipman, Ph.D., speaks to students Thursday ahead of their trip to Paris.

Members of Florida A&M University’s Incomparable Marching “100” Band and staff left Saturday for Paris to begin rehearsals ahead of their performance at the Louis Vuitton Men’s Paris Fashion Show on Thursday, June 23.

For Drum Major Jarvis Rittman, going to France is a defining moment. 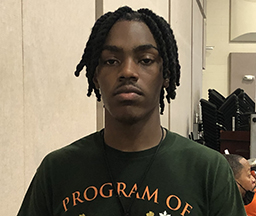 “I’m honored to be one of the members selected, not only to represent Florida A&M University but also America at the Louis Vuitton Fashion Show,” said Rittman, a senior health science student, during a brief pause in rehearsals Friday afternoon. “It’s a new experience for me being from Quincy, Florida. It’s very new to me.”

Rittman was among 35 students and about a dozen staff members who left campus in two separate groups Saturday morning. Both groups flew out of Tallahassee International Airport to Atlanta Hartsfield International, where Director of Bands Shelby Chipman, Ph.D., and the first group encountered FAMU President Larry Robinson, Ph.D., who was on his way back to Tallahassee after a week of meeting and conferences.

When the trip was announced, Robinson said, The Marching “100” is symbolic of the excellence of FAMU students and the expertise and care of our Music Department faculty and staff.

“We can’t wait to see them wow the city of Paris once again,” he said.

After the group arrives in Paris, a Band photo shoot is scheduled. The band will rehearse Monday, Tuesday, and Wednesday in preparation for a 30-minute show at 2 p.m. Thursday, Paris time, at the world-renown Louvre museum. As part of the preparation, the show’s producer watched the rehearsal via Zoom on Friday.

Clarinet player Kimieka Dunkley knows the trip will not be a vacation.

“It is going to be stressful, but it’s a great responsibility,” said the senior computer science student from Miami. “It’s something we are going to have to put all our efforts in. I am happy to be part of this hard-working team.”

The trip marks a triumphant return of The Marching “100” Band to Paris. In 1989, under the leadership of legendary founder, William P. Foster, the band performed in the Bastille Day Parade to celebrate the 200th anniversary of the French Revolution. Current Director of Bands Chipman, had graduated that spring but was invited back to travel to France. That was the last time Chipman performed as a member of the band.

“I’m just so excited for our students to have this opportunity,” said Chipman, who reminded students of the need for professionalism as they prepared to leave. “It’s a credit to our band students and to our institution to do everything to promote the FAMU brand.”