The Rattlers in Arms, five veterans who graduated from Florida A&M University’s famed Rattler Battalion, were honored for their generosity to students with a plaque at the Eternal Flame on Friday, April 29, 2022.

President Larry Robinson, Ph.D., and Vice President for University Advancement Shawnta Friday-Stroud, Ph.D., were among those who participated in the ceremony.

“It’s only proper we honor our Rattlers in Arms. Thank you, gentlemen, for what you are doing for our young men and women,” Robinson told the gathering. “Thank you for your generosity. You are giving from your heart and soul. You want to see each and every student succeed. Thank you for what you have done for FAMU and for your service to the United States of America.” 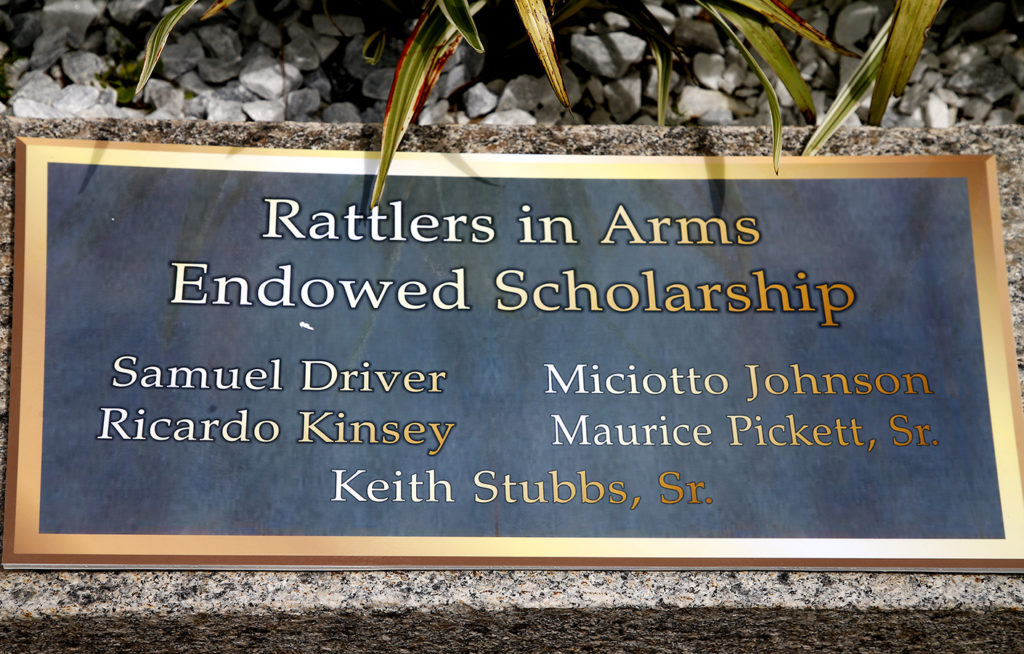 Kinsey, whose father graduated from FAMU, said beginning with an endowment in his parents’ name, he and his retired military colleagues have tried to help students.

“We were students here; we knew that students do have needs; as Dr. Robinson said, ‘many of our kids come from families that have an income of only $50,000.’  Without the help, we can’t move them forward,” Kinsey said. “That’s why I call upon the guys who served in the military. We served our country; now let’s serve these students. To whom much is given, much is required.”

Since his retirement, Kinsey has been an avid supporter and highly engaged Rattler. Most notable, he has established five endowed scholarships valued at more than $250,000. In 2017, he established the Lt. Col. Retired Ricardo “Rick” Kinsey Scholarship and has awarded more than 20 scholarships to high school students attending FAMU.

A distinguished military graduate of FAMU, Kinsey comes from a family legacy of Rattlers and has a bachelor’s degree in Business Administration. Kinsey is a staunch supporter of FAMU Athletics, FAMU Army ROTC and FAMU NAA. He is father of five children, Devin, Alaina, Jessica, Jordan, and Jansen. Alaina, Jessica, and Jordan are graduates of FAMU.  His daughter Jansen graduated from the School of Allied Health Sciences on Saturday, April 30.

Retired colonel Sam Driver is a 1990 distinguished military graduate who earned a Bachelor of Science in agricultural business.  After graduation, he was selected as an Army Aviation Officer and completed flight training in the AH -64 Apache at Fort Rucker, Alabama.  He has served globally as an Army officer, including returning to campus from 1997 to 2000 as an assistant professor of military science in the FAMU Army ROTC program.  He retired from the U.S. Army in 2017. Driver and his wife, the former Stefanie Shopshire, have two sons, Dylan and Nicholas.

“Thanks for the opportunity,” Driver said to applause. “We do it because we are family.”

Johnson, who flew in from Dubai for the ceremony, is the program manager for the ARCENT Training Support Services Contract (ATSSC) under Defense Training for Vertex’s Technology & Training (TTS) Division, a leader in critical mission support and training solutions.

Prior to joining Raytheon, and now Vertex in 2015, Johnson served in the U.S. Army until his retirement in 2014. He is an accomplished senior leader and mentor with more than 36 years of experience  leading multifaceted organizations focused on planning, training, systems automation, and program management.

“We stand on the shoulders of giants. I challenge all the newly graduated professionals to stand on our shoulders and we will push you,” Johnson said. “You can do anything you want to do it. If you fall down, get back up.”

Friday-Stroud said the Rattlers in Arms’ commitment to students is impressive.

“At the end of the day, we know it’s all about the students,” Friday-Stroud said.  “To have our alumni who traversed this campus to come back and give back, it’s truly an honor. We are happy to celebrate all you are doing for our students.”

Pickett graduated from Hawkinsville (Georgia) High School before enrolling at Middle Georgia College (MGC) in Cochran, Georgia, where he earned an Associate of Arts Degree in criminal justice. Shortly after graduating from MGC, Pickett enlisted in the U.S. Army and began his service overseas at United States Army Headquarters, Europe.

In the summer of 1984, Pickett left active-duty service, joined  the U.S. Army Reserves and resumed his studies at FAMU. In 1986, he graduated with honors from FAMU’s College of Social Sciences, Arts and Humanities with a Bachelor of Science in criminal justice. At the same time, Pickett was commissioned second lieutenant, Quartermaster Corps, in the U.S. Army.

Pickett retired from the U.S. Army in 2006 after 23 years of active military service. In retirement, he has served FAMU tirelessly. He was the vice president of the Washington, D.C., alumni chapter, is the immediate past president of the Plant City, Florida Chapter, and past Florida Region vice president.

During his cumulative military career, Stubbs exhibited experience  leading multifunctional organizations through diverse challenges, as a high-performance executive and advisor in strategic, joint, and high intensity combat environments. During a short break in active duty, he was awarded for his valor/heroism with the 2006 LEO Award. The event has recognized more than 260 of the “best of the best” among Central Florida law enforcement officers (LEO) during the last 18 years.

As a four-year Rattler Battalion scholarship recipient, Stubbs was commissioned in 1986 as an army officer/distinguished military graduate. He  served 30 years of combined active and reserve duty as a decorated combat military police officer and law enforcement officer for the City of Orlando.

He established the Colonel Keith Stubbs Scholarship to support students from King High School, Bartow High School, and Brandon High School seniors attending FAMU. Stubbs is a peer mentor, in the Wounded Warrior Project where he assists fellow veterans transition to civilian life and ensure skills and lessons learned from military service extends to a meaningful life and career. During the ceremony, Stubbs joked about Kinsey’s persistent fundraising.

“This man has gone in my pocket more than my wife. Every time I turn around, he has an idea. And he has the costliest ideas I have ever seen,” Stubbs said to laughter from the audience. “I am so happy to give. There are going to be children coming through; they are going to struggle just a bit, but knowing that even when we are resting, we will be able to help them moving forward makes me feel better.”