But for the group to cross the Atlantic required teamwork and cooperation from administrators, staff, parents, alumni, and Louis Vuitton executives to overcome sizable logistical hurdles given the tight deadlines.

“You cannot do a major thing without teamwork,” said Assistant Director of Marching and Pep Bands Darryl L. Baker, who handled the arrangements and worked out the logistics in the weeks since the Band received the invitation to perform. Baker credits the President’s Office, College of Social Sciences, Arts, and Humanities’ Dean Valencia E. Matthews, Ph.D., the Office of University Advancement, the Office of International Education and Development, the Provost’s Office, alumni, and elected officials for ensuring that the trip took place.

“Everybody came together,” Baker said. “Imagine the amazing things FAMU can do when we all work together.”

In May, Marching Band Director Shelby Chipman, Ph.D., received the first email from a representative: Would the Incomparable Marching “100” Band be interested in traveling to Paris to perform live at the Louis Vuitton Men’s Fashion Show in the legendary Louvre museum? It marked a return to Paris for the Band that performed in the 1989 Bastille Day Parade.

The producers of the event wanted to include a live marching band. They had seen videos of the Marching “100” performances and wanted the best. Chipman commended Baker for doing “amazing job coordination various aspects of the trip with stakeholders in Tallahassee and Paris.”

Contracts and logistics would not be a problem. Director of Woods Nicholas Thomas, Ed.D., would work on the arrangements of the tunes producers selected. Percussion Assistant and Choreographer Tova Lovely would work on the routines. But other paperwork could jeopardize the trip, Baker initially feared. 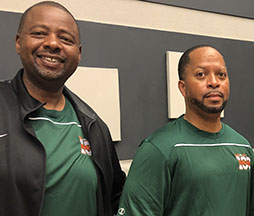 Marching 100 Band Staff Darryl Baker and Nicholas Thomas at the Band rehearsal in Paris on Monday.

“I was worried about passports. I knew many of the students, and some of the staff didn’t have passports,” said Baker on Monday as the students rehearsed at a venue along the Seine River in a Paris suburb. FAMU is home to many first-generation college students who have never traveled abroad and didn’t possess a passport. The all-expenses-paid invitation was for 35 students and 10 staff members. Among those selected to travel, 24 lacked a valid passport, including 20 first-time travel documents, Baker said.

Time was scarce. A routine passport application by mail takes eight to 11 weeks, while an expedited application by mail takes five to seven weeks, according to the U.S. State Department website. Students could obtain an expedited passport if international travel is within three business days, but they had to make an in-person appointment in a city such as Miami or Atlanta, which had a designated office. Some of the students were in South Florida and Atlanta.

Beyond the expense of traveling to the appointment, there was the cost of the rushed passport application -$250. First-time passports cost $165, plus $60 for the expedited service fee. Same-day service was another $35. Louis Vuitton executives agreed to cover the expense of expediting the passports.

“Louis Vuitton said, ‘we want to do this.’ They asked, ‘what are your issues? If you can get over here, we will take care of you,’” Baker said. “They wanted to have that representation here. It speaks to the legacy of the FAMU Marching ‘100’ that they were willing to invest in this group of American students.”

Band officials initially reached out to officials in Georgia but then turned to U.S. Rep. Al Lawson, a FAMU alumnus, for assistance. Lawson’s Office connected Band staff with the office of Congresswoman Frederica Wilson of Miami.

Wilson’s scheduler, Joyce Postell, also a FAMU alum, helped set up 24 appointments for first passport applications and renewals on the Monday and Tuesday ahead of the June 18 departure. Students had to find transportation to get to those appointments. 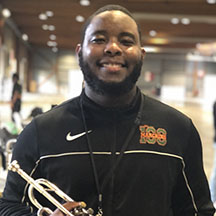 When Sebastien Zephir, a junior elementary education, and trumpeter, first heard about the trip, he was “very afraid” his lack of a passport would cost him the chance of a lifetime.

“No one had traveled outside the U.S. in my family, other than my mom. I am being a leader for my brother,” said Zephir, the son of a Haitian immigrant. During a break in rehearsal, Zephir described the experience as surreal. “Every time I lay down, I can’t believe I am in Paris. It’s amazing.”

While the lack of passports was being resolved, there was other paperwork to process. David Self in the FAMU General Counsel’s Office dealt with the producers on the contract.

University International travel required forms to be filled out and signatures from the dean, provost, and president. The Office of International Education and Development asked for forms to be submitted 35 to 40 days before travel. But it was less than three weeks between when Chipman announced the plans at the June 3 Board of Trustees meeting and the Band’s scheduled June 18 departure.

“For the shining stars of the school, the Marching ‘100,’ to be able to do this, it’s great,” said Baker. In the weeks leading up to the trip, Baker was awakened daily by 3:59 a.m. email from his French counterparts (Paris is six hours ahead), as they discussed details of the Band travel to Paris, rehearsing four consecutive days and then performing at the Louvre museum.

“It’s work, but it doesn’t make me feel like work,” Baker said. “It makes me feel good.”