Benji B and Band Director Shelby Chipman at rehearsal in Paris.

Paris, France, June 21– Florida A&M University’s Marching “100” was selected to perform at the 2022 Louis Vuitton Men’s Paris Fashion Show because of the producers’ desire for an “authentic” marching band experience.

Benji B, music director at Louis Vuitton Men’s, said the creative vision for this year’s show called for a marching band.

“In all the work we’ve done on shows here, authenticity is really at the center of everything we’re interested in. We don’t reference things or emulate things. We go to the top, and that’s why we came to you,” said Benji B, one of Britain’s most respected and well-known DJs. He is also a BBC Radio presenter, and record producer who has worked with some of the biggest names in hip-hop. Since 2010, he has presented a weekly show on BBC Radio One that highlights a mix of hip-hop, electronica and R&B.

The idea for a marching band performance in the men’s fashion show had been discussed in previous seasons with then-Louis Vuitton Creative Director Virgil Abloh, an African American designer who died last November at age 41. The two men worked closely for more than a decade on various projects and, since 2018, on the Louis Vuitton Men’s Fashion Show. 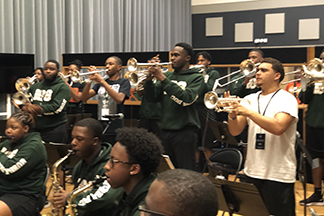 “This is the ninth season. When we raised the idea of having a marching band, we wanted the energy, spirit, and sound,” Benji B said. “I really wanted to reach out and see if there was any possibility that we could make it happen. I am glad that we did.”

His research of marching band culture took him straight to the Marching “100.”

“I am well aware of the incredible heritage and history,” he said. And it wasn't just the signature national performances such as the NBA All Star Game, NFL, the 48th Grammys and with Prince at the Superbowl in 2007. 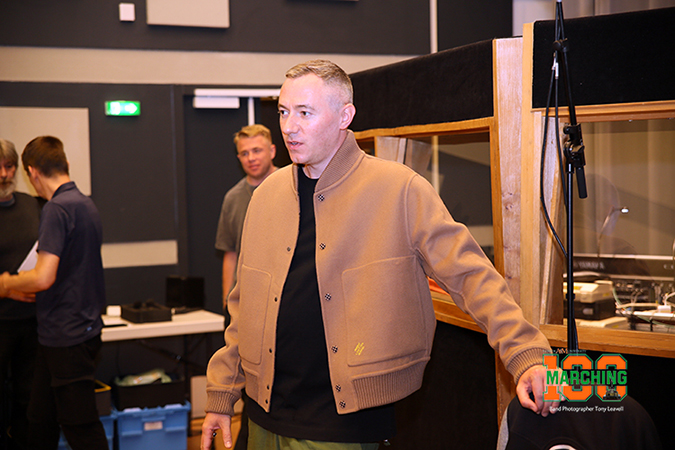 Benji B in the studio observing the Marching “100” Band rehearse in Paris (Credit: Tony Leavell)

“It’s watching homemade videos and iPhone footage of the Mighty Rattler Intro and the Snake Walk,” Benji B said. “I have a great deal of respect for the incredible culture and heritage of this art form. What they do is at the very top. It may feel exciting to be in Paris to do this project, but it’s just as exciting to us, and it’s just as much of an honor to have what they do on the runway.”

Louis Vuitton offered an all-expenses trip for 35 students and 10 staff to fly to Paris to perform at the opening of the Men’s Fashion Show 2 p.m. (Paris time) Thursday, June 23 at the Louvre museum.

Before leaving Tallahassee, band staff worked on arrangements set to music producers sent and band members began rehearsals. Since their arrival in Paris Sunday morning, band members have been rehearsing the songs in a studio and practicing the routines on a simulated runway. Their performance is scheduled to last about 30 minutes.

Director of Bands Shelby Chipman, Ph.D., is delighted by the energy and dedication displayed by the students over the past three days. He anticipates a memorable performance.

“The opportunity to perform in this EPIC moment in Paris, France during the Louis Vuitton Fashion Show is truly another major accomplishment and adds to our strong legacy of excellence. It speaks to the amazing talent we have in the Incomparable Marching “100,” said Chipman, who performed with the Band during the French Bastille Day parade in 1989. “I’m so proud of the tremendous work they have put into this show in a short time. I can’t wait for the world to witness this explosive and extraordinary production. Much love to Louis Vuitton and their artistic director Benji B. and the entire team. You are officially honorary FAMU Rattlers for Life.”