The Marching “100” Band performed at the Florida Classic in Orlando.Credit: Christian Whitaker.

Florida A&M University’s Marching “100” is one of two Historically Black Colleges and University bands featured in a 60-second Pepsi ad to be aired this weekend.

Jackson State University’s (JSU) “Sonic Boom of the South” is also featured in the spot, titled “The Halftime Game” will bring the excitement of storied HBCU band culture during one of the biggest football games of the season, airing on ESPN 2 during this weekend’s Southwestern Athletic Conference (SWAC) championship game on Saturday, Dec. 4.

“This ad campaign provides a fitting showcase for two exceptional music programs,” said FAMU Director of Bands Shelby Chipman, Ph.D. “Our marching band students are committed to excellence in the classroom and performing on the field. This campaign celebrates their dedication and talent. Fans of the incomparable Marching ‘100’ will be pleased. It was an amazing experience for our students to work with the production team during their visit to our campus.” 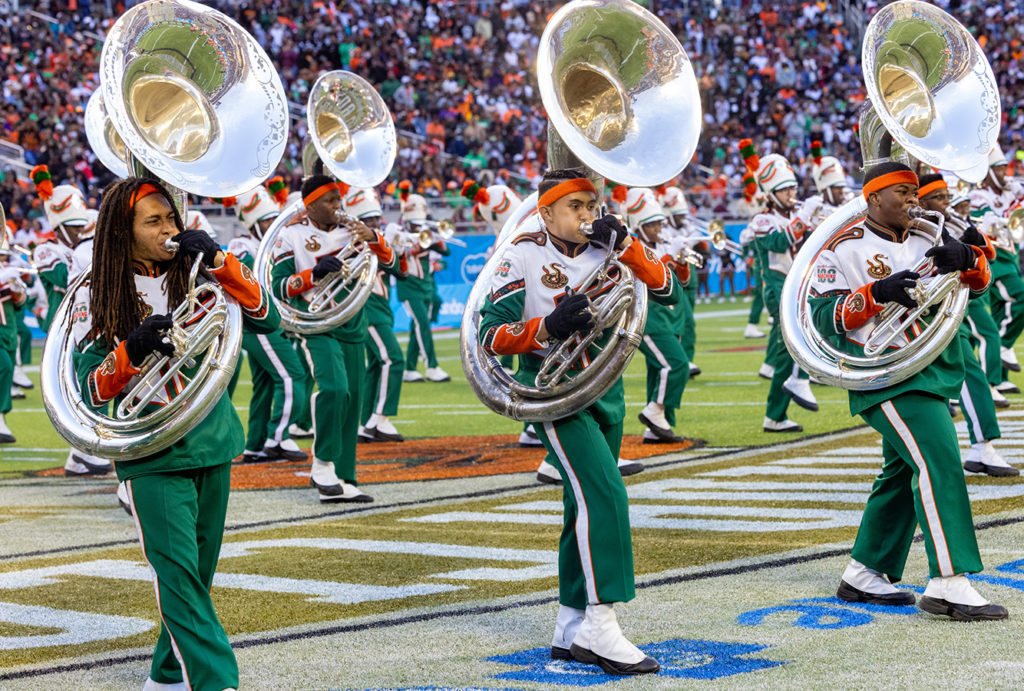 Directed by HBCU alum Alan Ferguson in partnership with Creators League, the Pepsi in-house studio led by Lou Arbetter, the first-of-its-kind ad features two top ranking HBCU marching bands highlighting the electricity and history they bring to gameday. Pepsi is investing more than $3 million behind the ad, set to run across SWAC media, including on ABC during December’s Celebration BOWL, as well as on national media outlets throughout the end of the month.

“At PepsiCo, we’ve committed to supporting HBCUs year-round and I’m honored to help shine a light on these marching bands with this new spot airing during one of the largest games of the season,” said Chauncey Hamlett, CMO/VP of PBNA, South Division. “We wanted to spotlight these two incredible bands because we know that in HBCU culture, the game is not just about football, but also the energy, hype, and history these bands bring to halftime and beyond.”

This is the latest step in PepsiCo’s long term commitment to HBCUs and fostering Black talent, which includes a partnership with JSU Coach Deion Sanders, multi-year partnerships with the National Battle of The Bands and as the primary beverage sponsor of the Southwestern Athletic Conference, the “She Got Now” Allen McKellar Jr. Internship Program for HBCU female students, a $100,000 donation that made it possible for Hampton University’s marching band to perform in its first Macy’s Thanksgiving Day Parade, the MTN DEW Real Change Fund, which awards HBCU Students $1 million dollars to fund startups, and more.

“It is an esteemed honor to have been selected to participate in a nationally televised commercial with Pepsi,” said Roderick Little, Ph.D., JSU director of bands. “Of course this is an outstanding opportunity for our students, band and university, but I’d be remiss if I didn’t acknowledge what this affiliation means for all HBCU band programs regarding exposure that could garner the support of future donors and corporate sponsors. The future is bright for HBCU band programs because of great opportunities such as these!”

The ad campaign is part of the PepsiCo’s larger Racial Equality Journey, which in 2020 saw the company announce commitments of more than $570 million over the next five years to elevate diverse voices within the company, supply chain partners, and communities, while helping to address issues of inequality and create opportunity.