Hundreds of students from different parts of the country competed in the world-renowned robotics program, For Inspiration and Recognition of Science and Technology, also known as FIRST Robotics, at the Lawson Multipurpose Center at Florida A&M University (FAMU) March 17-19, 2022.

Excitement was in the air as robots and students tested their wits and tech skills against each other. Loud music pumped up the crowd, while the sounds of clanging metal, the whirring of wheels, and the thump of basketball like cargo balls brought cheers from the audience. 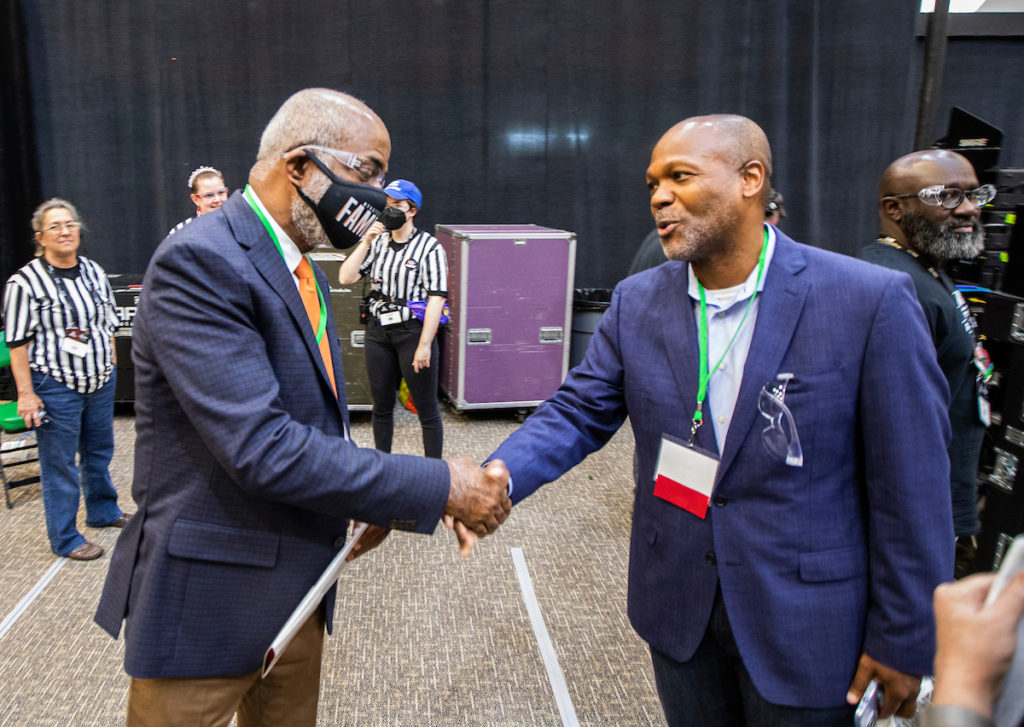 FAMU President Larry Robinson, Ph.D., Farrukh Alvi, Ph.D., interim dean of the FAMU-FSU College of Engineering, and Chris Moore, the new CEO of FIRST, were some of the dignitaries in attendance.

“One of our initiatives at FIRST is equity, diversity, and inclusion and we wanted to give our students of color, our women and community groups the opportunity to go to a regional at a place where they could feel at home,” said FIRST’s Regional Director Wendy Austin.

Among the competitors was Alexis, a student from Trinity Forest Team 8732 from New Orleans.

“Being at FAMU today is a historical moment, a lot of amazing people have walked through this university, and here we are, following their footsteps, and their legacy,” she said. “We are an all-girls team, and we are glad to be here to represent women in STEM.” 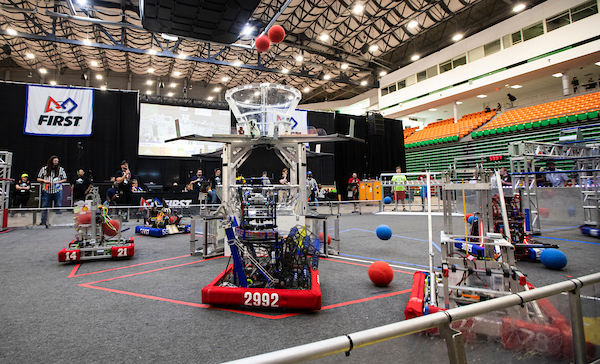 The finals of the FIRST Robotics competition line up on Saturday at the Al Lawson Center on the Florida A&M University campus.

The FAMU-FSU College of Engineering hosted the event for the first time. Thirty-six teams from the Southeast U.S. and Hawaii competed.  At the high school level, each team competed to re-imagine the future of safe, high-speed travel and lightning-fast deliveries through innovative engineering, creative thinking, and teamwork.

The teams battled in a game called RAPID REACT presented by the Boeing Company. The game is a fast-paced challenge in which teams had to pilot their creations to an area where they pick up cargo and shoot it through the air. They use different strategies to score as many points as possible. The game is based on the shipment of packages in rural and urban areas, to disaster relief delivery and high-tech air transit.

Tisha Keller, FAMU-FSU College of Engineering marketing and communications director, is the liaison for FIRST.

“We put a lot of time, energy and resources to make this happen at FAMU because we know nurturing young talent directly relates to our mission as a college,” Keller said. “These are future engineers, future tech leaders, and almost all our faculty regardless of discipline has either been involved in FIRST robotics or knows about it. That tells me that the faculty of tomorrow are in FIRST today.”

“I joined FIRST Robotics in the early days of the competition when I was a sophomore in high school in 2001. We were team number seven. Now if you look around, you will see teams with numbers like 6184, 8723. That’s how many more teams have come up since then,” Hubicki said. “Building robots for FIRST competitions is one of the ways I gained experience before going to college. After studying robotics and mechanical engineering, I got my Ph.D., and now I am a robotics professor.” 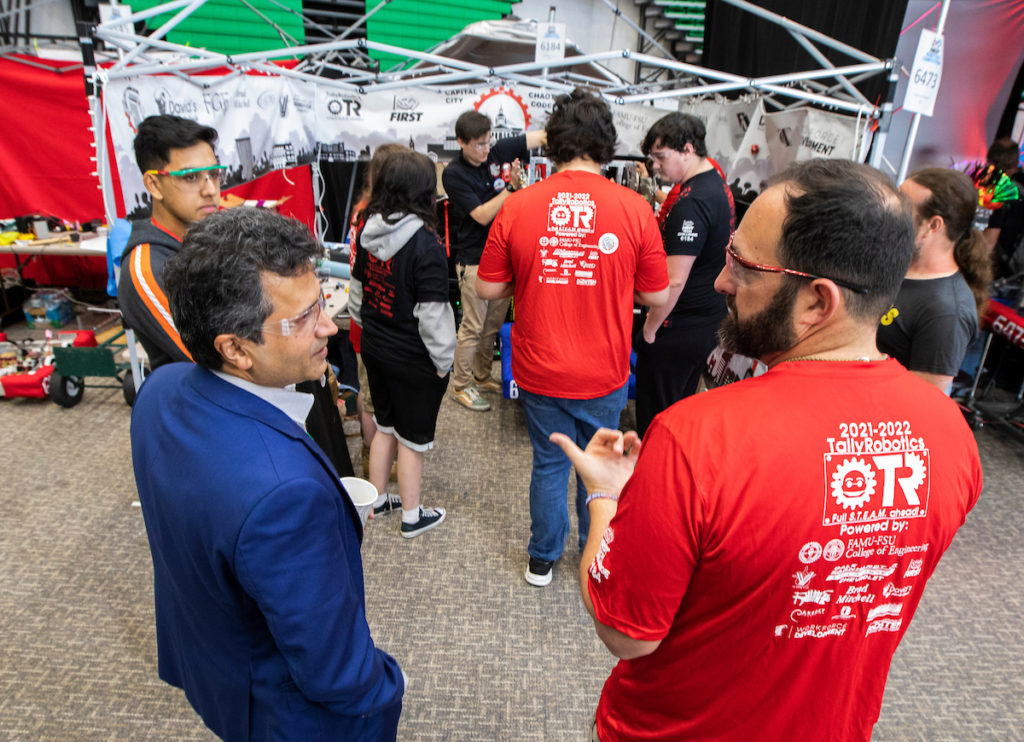 FAMU-FSU College of Engineering Interim Dean Farrukh Alvi watches as Team 6184 Leon Robotics, from Tallahassee, work on their robot during the Inaugural Tallahassee Regional of the FIRST Robotics competition at the Al Lawson Center.

Teamwork is an important lesson learned in FIRST.

“People forget that robotics is not just one person, sitting alone in a room, making a robot; it involves a team of people,” Hubicki said. “It’s a huge endeavor that you can’t do alone. Teamwork is fundamentally important, not just in robotics but in the workforce at large.”

Hannah, from the Capital City Chaotic Coders Team 6184, was new to the FIRST competition, “It’s so much fun working as a team,” she said. “I have made so many friends; it’s inspiring, and the school has been amazing.”

Her team has been practicing at Camilo Ordóñez’s mechatronics lab, located at the FAMU-FSU College of Engineering. Professor Ordóñez mentors the student team, along with several members of the college’s robotics club. The Tallahassee team was brought together by Tally Robotics, a local organization.

Shonda Bernadin, an associate professor of electrical engineering at the college, has been involved in FIRST for many years and has conducted outreach programs with local middle and high schools in the area.

“Seeing the culture of FIRST and the culture of FAMU come together, is powerful. An event like this plants seeds in these kids. They think, wow, I can do this. It’s exactly what I envision, in terms of increasing diversity and awareness and inspiring our youth to pursue excellence in STEM,” Bernadin said.

The winners of this competition go to the World Championship, held in Houston, Texas. Four top teams from the Regional will advance to the next event to compete with 460 teams from around the world. Being in the event itself is a win for students who participate. There are more than $80 million in scholarships for FIRST alumni.

“When you encounter a FIRST student in an interview, they will be able to look you in the eye, speak clearly and concisely,” she said. “That’s not from building robots, it’s from being in this program.”

See the full results of the competition at: